Held every January, the PIIC is one of the most prestigious classic motorcycle races in the world, second only to the Classic TT at the Isle of Man in August each year.

And this is how the story began:

Dave Crussell, Team Captain of Team USA, used a CMR frame kit for his Yamaha TZ750 for racing in the inaugural Classic TT on the Isle of Man in 2013. Dave was so impressed with the handling of the bike, completing a fast lap of 107.55 mph with very little practice on the track due to weather and accidents on the island. 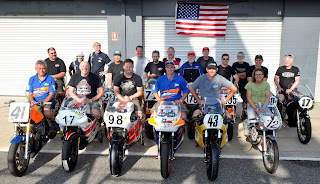 
The team performed really well, with Jason Pridmore coming to within 0.3 seconds of the lap record, his first time at PI. After the races, Jason told Denis that the CMR-framed Yamaha F1-FJ1250 was "the best-handling bike I've ever ridden."

Jeremy McWilliams, #1 Team UK rider, told Denis that Jason's CMR-framed Yamaha was "impossible to catch" in the more technical sections of the PI track, and that Jason's bike was handling better than McWilliams' own Harris-framed Yamaha. Music to Denis' ears. Jeremy claimed that if Team USA had better engine reliability in 2019, they would be unbeatable.

After the races, Jeremy brought Roger Winfield, UK Team Captain and owner of most of the team's bikes to speak with Denis. Roger asked Denis how CMR frames differed from the Harris frames his team was using, and why the CMR frames handled better.

In January 2019 Team USA returned to Australia for the PIIC races, ready for combat. For the past five years Australia and the UK had dominated; 2019 saw Team USA earn their share of podium honours.

Four of the Team USA racers, all of CMR-framed bikes, were in the Top 10 of accumulated points in the four-race series: Josh Hayes place third, Larry Pegram 5th, Micheal Gilbert 6th, and Barrett Long 10th.

Over the previous five years, Team Australia and Team UK had dominated. In 2019 Team USA came within 43 points of winning top honours.

Thanks to Team USA for believing in CMR Racing Products!
Posted by CMRracingproducts at 18:56