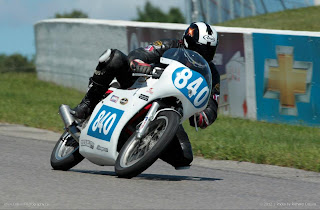 Also, visit the CMR Racing Products Inc. website at www.cmrracingproducts.com.
Posted by CMRracingproducts at 18:22 No comments:

UPDATE October 2012
Ex-pat Brit racer Mick and his partner Natalie were dealt a heavy blow early in the 2012 racing season when they learned that Natalie's father was very ill back home in the UK. He has since passed away and CMR extends to Mick, Natalie and their family our sincere condolences.

Naturally Mick was unable to compete with his CMR Drixton Yamaha this season but according to an email recently received, he was going through the Drixton ready for the 2013 race season.

CMR has been sponsoring Mick Vaclavik of Ontario, Canada since the beginning of 2011. The company supplied Mick with a very trick Drixton frame/swing-arm/gas tank kit for his Yamaha XS650 engine fitted with a 750 big-bore kit. He  had a great season at events throughout North America in 2011. Mick will be a rider to watch in 2013.

Denis selected Mick for CMR sponsorship because of the potential he saw in this rider. Toivo Madrus, a good friend of Denis' who had been helping Mick with engine modifications, suggested CMR sponsor Mick. In 2011 Mick won the Canadian VRRA (Vintage Road Racing Association) Period II and III Championships.

Mick was running very strongly in 2009 and 2010 on his stock-framed Yamaha XS750, but had been finishing in the middle of the pack despite riding extremely well. Mick thought that the Yamaha's handling was an issue; Denis believed that a CMR Drixton frame kit could realize Mick's podium potential. So CMR Racing Products reworked the very popular and successful Drixton design and produced a  frame to accommodate Mick's own wheels, brakes and forks. CMR built the the high-level exhaust system which Mick preferred for his riding style.

And the results proved Denis, Toivo and Mick right. At Louden New Hampshire in May 2011, Mick finished near the front in his first race on the new CMR Drixton Yamaha 750 twin - despite riding this very technical track for the first time. Mick couldn't stop talking about how well the bike handled. At every event Mick entered throughout 2011, he ended up close to or on the podium, except for an incident at Mid-Ohio where he crashed (low-sided) and escaped relatively unscathed. And this, with an engine basically stock except for the larger capacity.

Denis had worked with Works Performance Shocks ( www.worksperformance.com) of California on many projects during 2011 and their senior engineer Pierre Vaillancourt produced the twin rear shocks to assist with the handling package for Mick's bike. Mick reports that the bike handles extremely well on all tracks and surfaces. As he says "I can put the bike anywhere I want and it's happy to go there". The CMR Drixton is a  predictable and reliably handling bike - and the results prove it.

At Mid-Ohio Mick was staying with 4-cylinder 750's with lots more horsepower - what he lost on the straightaways he made up for in the corners due to the superb handling of the CMR framed bike. Mick rode Louden, Mid-Ohio, Barber, and VRRA's Mosport, Shannonville and St. Eustache events in 2011. He set several track records in his class. In his first year of CMR sponsorship Mick captured the VRRA Period II Heavyweight Championship and Period III Middleweight Championship on his CMR framed machine. Mick's goals for the 2012 season are to pair the superior handling of the CMR Drixton with a more powerful XS750 twin engine to enable him to outrun the horsepower of the four-cylinder engined bikes.

Also, visit the CMR Racing Products Inc. website at www.cmrracingproducts.com
Posted by CMRracingproducts at 08:15 No comments: